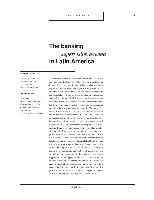 The banking sector reforms that the countries of Latin America undertook in the 1990s were an important step forward, but proved insufficient. Although it is true that the region as a whole progressed significantly, particularly in reducing the role of the State, and that market mechanisms and the regulatory framework in which banking institutions operated were improved, while at the same time the presence of foreign operators increased, it is no less true that most of the Latin American countries continued to experience systemic crises or severe banking instability. This shows that there are still issues that need to be addressed before the region can have a sound banking sector. They include in particular the need to do more to increase the real independence of supervisory bodies by separating bank supervision from short-term economic and political decision-making. Bank supervision needs to be regarded as a matter of State, which means giving priority to its technical and professional aspects; to overcome the difficulties involved, it is essential that there be a real political will to carry through the changes that are required. This article highlights the need to deal with some structural issues, such as the supervision of financial conglomerates, excessive market concentration among a few institutions nationally and region-wide, and the relationship between this and the safety nets which are supposed to contain systemic crises, but which are unable to do so adequately. As regards the regulatory aspects, this paper argues that transparency and market rules in general need to be improved, as do mechanisms for evaluating portfolio and related-party credit risk, especially where effective application of existing rules is concerned.