Home » Publications » Food systems and COVID-19 in Latin America and the Caribbean N° 7: The role of social protection measures
Available in: EnglishEspañol

Food systems and COVID-19 in Latin America and the Caribbean N° 7: The role of social protection measures 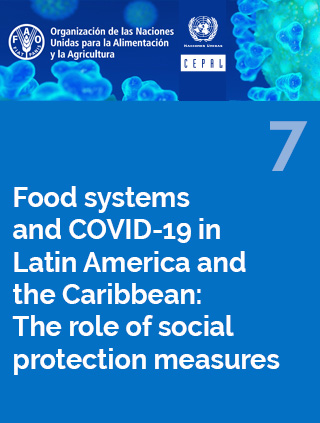 As the pandemic has progressed, governments have had to face new challenges. While countries initially focused on mitigating the effects of severe health restrictions, over the weeks, their attention has shifted to a particularly serious threat: the economic and social crisis. Unfortunately, the outlook is not encouraging.

Resources must be directed to those most affected by this crisis, the vulnerable population, in this case, people without sources of income (the unemployed, the elderly, children and dependents) and informal workers, a group composed mainly of young people, women, migrants and indigenous people. It should be noted that the proportion of vulnerable population is even higher in rural areas.

Social protection programmes, among mitigation measures, are a fundamental right. Therefore, in this edition of the bulletin, we analyse the existing protection alternatives, with special attention to rural areas, which we cannot neglect.

Food systems and COVID-19 in Latin America and the Caribbean N° 7: The role of social protection measures